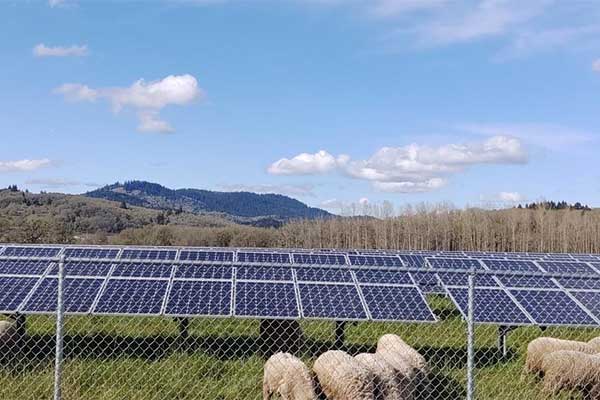 The just-published study with lambs and solar panels was carried out in 2019 and 2020 at Oregon State’s campus in Corvallis. (Oregon State University)
KEY POINTS

Land productivity could be greatly increased by combining sheep grazing and solar energy production on the same land, according to new research by Oregon State University scientists.

This is believed to be the first study to investigate livestock production under agrivoltaic systems, where solar energy production is combined with agricultural production, such as planting agricultural crops or grazing animals.

The researchers compared lamb growth and pasture production in pastures with solar panels and traditional open pastures. They found less overall but higher quality forage in the solar pastures and that lambs raised in each pasture type gained similar amounts of weight. The solar panels, of course, provide value in terms of energy production, which increases the overall productivity of the land.

Solar panels also benefit the welfare of the lambs by providing shade, which allows the animals to preserve energy. Also, lamb grazing alleviates the need to manage plant growth under the solar panels through herbicides or regular mowing, which require extra labour and costs.

“The results from the study support the benefits of agrivoltaics as a sustainable agricultural system,” said Alyssa Andrew, a master’s student at Oregon State who is the lead author of the paper published in Frontier in Sustainable Food Systems.

Solar photovoltaic installation in the U.S. has increased by an average of 48% per year over the past decade, and current capacity is expected to double again over the next five years, the researchers say.

Past research has found that grasslands and croplands in temperate regions are the best places to install solar panels for maximum energy production. However, energy production in photovoltaic systems requires large areas of land, potentially causing a competition between agricultural uses.

Agrivoltaics looks to diffuse that competition by measuring the economic value of energy production and agricultural use of the same land. Past research has focused on crops and solar panels and found that some crops, particularly types that like shade, can be more productive in combination with solar panels.

Another recent Oregon State study found that shade provided by solar panels increased the abundance of flowers under the panels and delayed the timing of their bloom, both findings that could aid the agricultural community.

The just-published study with lambs and solar panels was carried out in 2019 and 2020 at Oregon State’s campus in Corvallis. Findings included:

The lambs gained almost the same amount of weight in the two pasture types in both years.
The daily water consumption of the lambs in the two pasture types in spring 2019 were similar during early spring, but lambs in open pastures consumed more water than those grazed under solar panels in the late spring period. There was no difference observed in water intake of the lambs in spring 2020.
Over the two years, solar pastures produced 38% less forage than open pastures.
Overall, the return from grazing was $1,046 per hectare (one hectare equals 2.47 acres) per year in open pastures and $1,029 per hectare per year in pastures with solar panels.

“The overall return is about the same, and that doesn’t take into account the energy the solar panels are producing,” said Serkan Ates, an assistant professor in the Oregon State’s Department of Animal and Rangeland Sciences and a co-author of the paper. “And if we designed the system to maximize production we would likely get even better numbers.”

Andrew is now working on a follow up to this study where she is quantifying the forage and lamb production from three different pasture types under solar panels.

The Agricultural Research Foundation at Oregon State funded the research.

[FRENCH] Automakers are pivoting toward silicon for lithium-ion battery chemistry