A Frenchman is credited with being the first to discover the photovoltaic effect that produces electricity from sunlight. The first solar panel was built in the US. But when Abu Dhabi decided to build the world’s largest individual solar power project, they looked east for help.

The country partnered with Chinese and Japanese companies to construct a facility, which opened this year, with a peak capacity of 1.18 gigawatts generated by 3.2 million solar panels. That’s because Asia, more than any other region on the planet, and China, more than any other nation, currently represent the future of solar energy, and are at the heart of the ensuing industrywide transformation from fossil fuels to renewable and nuclear energy.

Decarbonization is changing the face of energy and the world economy in more ways than most consumers — and even most executives — appreciate. Besides the transition from molecule to electron, as this move toward electrification suggests, it is also shifting the industry’s economic base from West to East and reconfiguring the hierarchy of companies and geographies that define energy.

Asia is the 800-pound gorilla in the energy story.

First, its continued economic growth and rising standard of living will make its constituent nations pre-eminent energy consumers for the foreseeable future. A study by BP indicates that Asia, including China and India, will represent 43% of global energy demand by 2040, and through that year, the region will account for more than 50% of the growth in demand.

In contrast, energy demand among the 36 nations in the OECD, which includes most big economies in the Americas and Europe, will be flat.

China’s sunny outlook
Second, places like China are already among the most important suppliers of non-fossil fuel-based energy and technology. By 2017, China owned 72% of the world’s solar photovoltaic module production; in comparison, the US has 1% and Europe 2%. Of the eight top producers, six are Asian. Not including hydropower, China has somewhere around one-third of the world’s installed renewable capacity; the EU has a little over a quarter, and the US accounts for 14%. China also leads in the generation of hydropower.

As the electrification of transportation advances and demand grows for renewable energy storage solutions, China looks likely to monopolize here, too.

China produces at least two-thirds of the world’s production capacity for lithium-ion batteries, which are used in electric vehicles (EVs), mobile phones and laptop computers (some estimates put their share at closer to 70%), and it looks likely to hang on to that lead through at least 2028. And besides being the largest market for EVs, China also controls the bulk of production.

China is the third-largest miner of the primary raw material used to produce those batteries, lithium — often referred to as white petroleum because of its mounting economic importance. Chinese producers are also buying up lithium reserves in Chile, the world’s second-largest lithium miner (Australia takes the top spot). 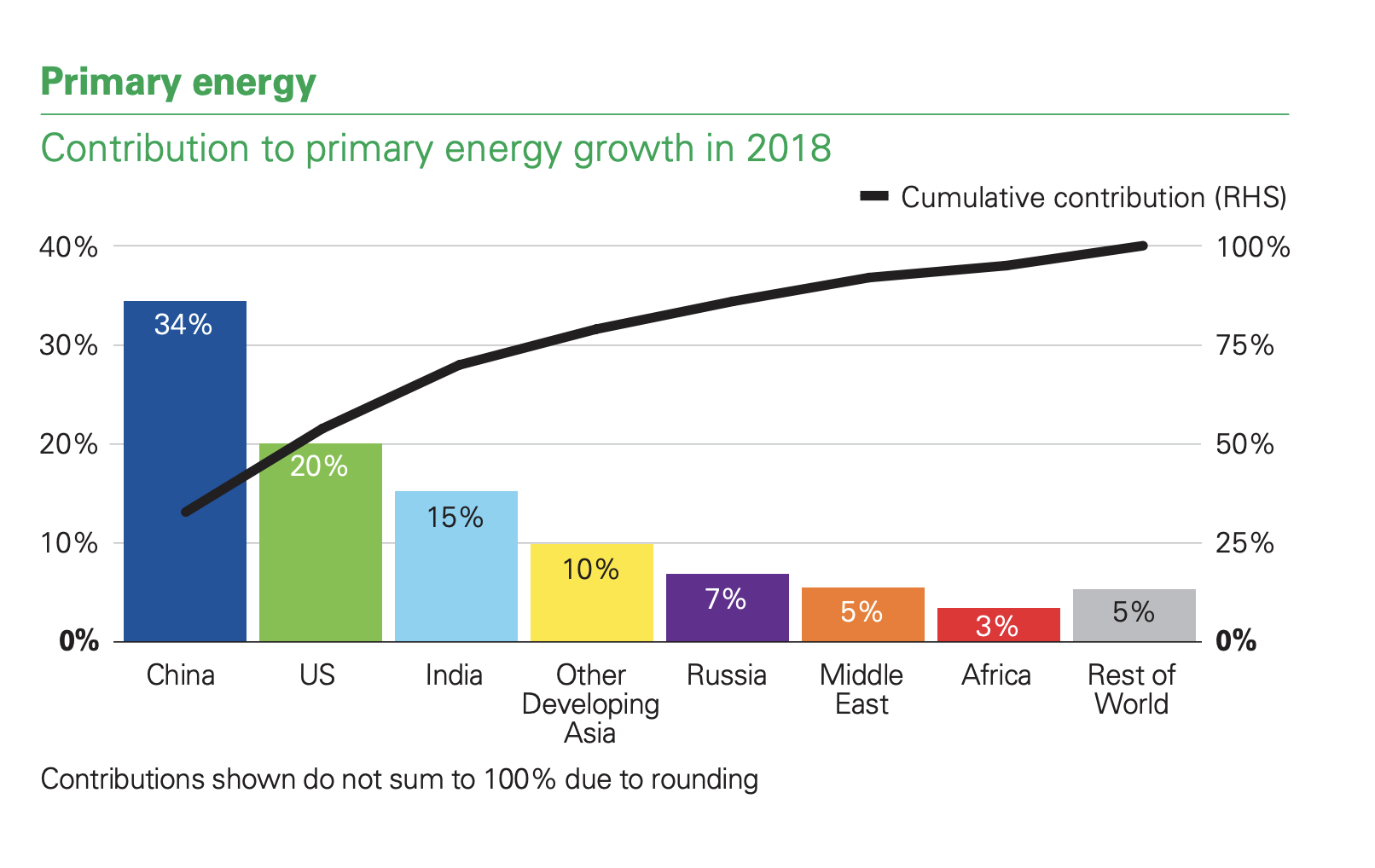 China and India accounted for almost half of the world’s growth of demand for energy in 2018 (Image: BP Statistical Review of World Energy 2019).

A fundamental overhaul
Of course, climate change is forcing the energy industry to undergo an existential transformation that may eventually see the elimination of fossil fuels entirely. While most executives at oil companies will be dead or at least retired before that transition proceeds to what seems its inevitable end, the slowing of demand is already being felt.

Worldwide, demand for oil will peak in around 2034, according to Vitol, a Switzerland-based energy and commodity trading company. Wood Mackenzie, a commercial intelligence consultancy, reckons demand in the developed world has probably already topped out, with the OECD expected to move into structural decline by next year. The global demand for liquid fuel is about to see its growth rate take a dramatic dip over the next five years.

By contrast, the demand for electricity seems insatiable. Electrification rates continue to rise across the globe, with Asia expected to be close to 100% coverage by 2030.

Much of that growth in demand may be supplied by renewables and nuclear power rather than fossil fuel-generated power, although natural gas is expected to play a role for years to come. It also may be accomplished through decentralization of generating capacity, such as recent rural electrification projects in places like Malawi and Bangladesh where farmers and villages use solar panels and small generators to provide their own electricity.

Yet despite the urgency of climate concerns and the rapidly falling cost of renewable energy, the speed at which this existential energy transition will happen is uncertain, as pre- and post-tax subsidies on fossil fuels remain in place, discouraging consumers to make the change to a more environmentally beneficial and frequently cheaper source of energy.

The International Monetary Fund estimates post-tax subsidies on fossil fuels like coal and petroleum — a result of unpriced externalities, such as societal costs from air pollution and global warming — totaled $5.2 trillion in 2017.

Regardless of the speed of transformation, there’s no doubt it is already well underway. That’s why places like the United Arab Emirates (of which Abu Dhabi is the largest) are building solar power and nuclear facilities, despite being the world’s eighth-largest oil producer — and making the transition with Asian partners. They see the future.

—
This article was written by Francois Austin, Partner, Oliver Wyman. It was originally published on the “World Economic Forum”. It has been republished here in accordance with the website’s Terms of Use.