This article is written by Michael D. Mehta, a professor at the Department of Geography and Environmental Studies, Thompson Rivers University. He is the owner of the Sweet Spot Solar Company.

Solar photovoltaic (PV) technology has evolved steadily since it was first developed by Bell Labs in 1954. It is now scalable, easily integrated with other energy technologies including batteries, and the cost of modules (commonly known as panels) has decreased by 80 percent since 2009.

Decades of improvements in engineering and manufacturing processes have led to moderately efficient, low environmental impact, silicon-based crystalline solar modules that fill rooftops and fields around the world.

This is all about to change with new technology based on manufacturing techniques that use more toxic chemicals, including nanomaterials. Next-generation solar modules offer a lot of potential but might be more toxic than we expect.

Solar cells, the units that convert light into electricity, have been encapsulated in a variety of coatings to build solar roads, sidewalks and bicycle paths. The International Space Station and many satellites also rely on this technology, and new electric vehicles like the Tesla Cybertruck offer onboard solar modules for charging.

My project at Thompson Rivers University shows how this is being done in Canada. This project — known as the Solar Compass — is part of Canada’s first solar sidewalk system. 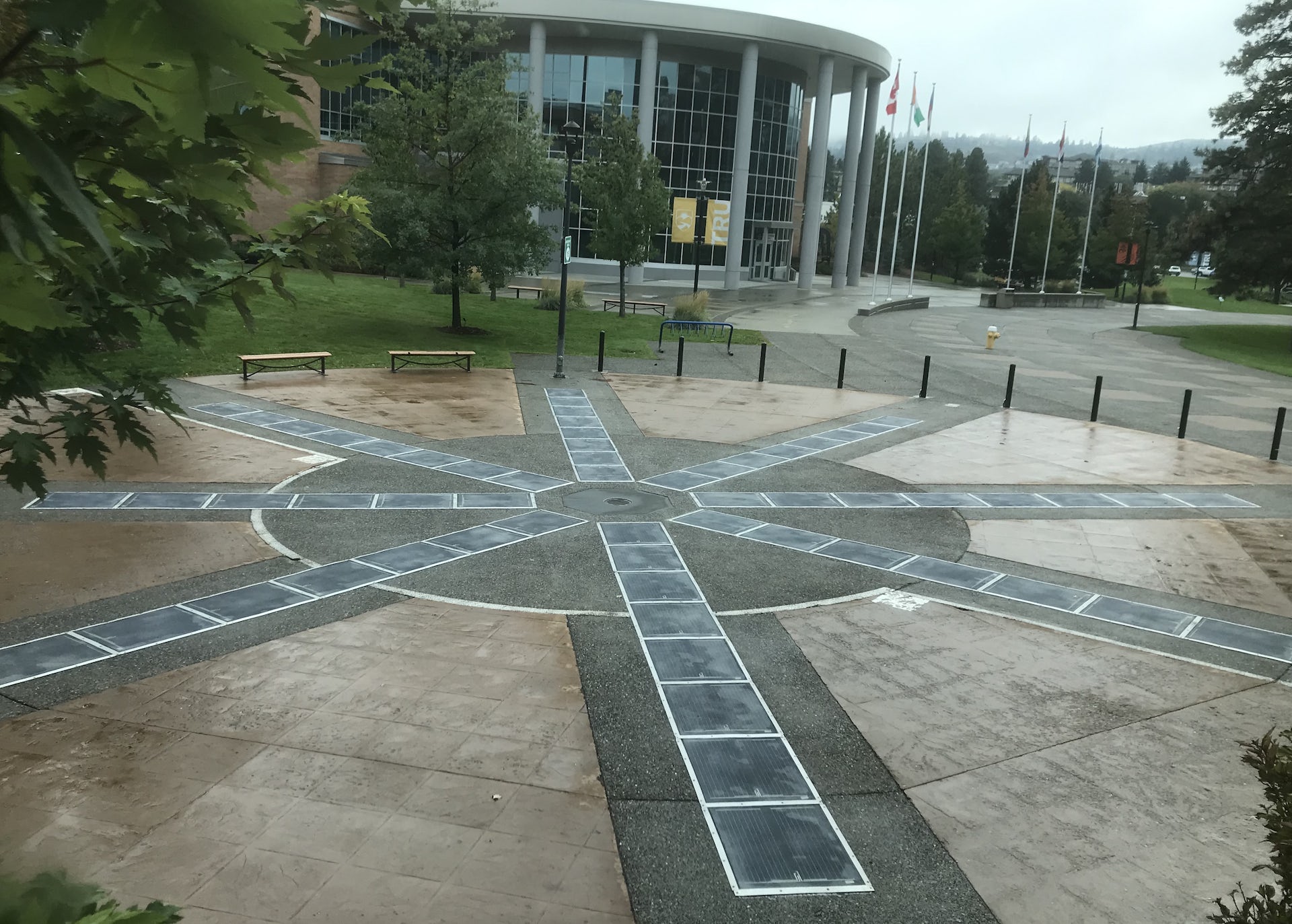 The Solar Compass was installed in October 2017, and it is a partnership between Thompson Rivers University and Solar Earth Technologies. (Michael Mehta)

According to a forecast published by the International Energy Agency in 2019:

“Renewable power capacity is set to expand by 50 percent between 2019 and 2024, led by solar PV. This increase of 1,200 gigawatts is equivalent to the total installed power capacity of the United States today. Solar PV alone accounts for almost 60 percent of the expected growth, with onshore wind representing one-quarter.”

In 2018, the World Economic Forum estimated that 70,000 solar modules will be installed every hour on a global basis over the next five years.

Solar PV avoided the equivalent of 2.1 million tonnes of carbon dioxide in Canada in 2016, according to a calculator made available by the International Renewable Energy Agency.

Crystalline silicon cells are the most common technology in use today, claiming more than 90 percent of the global market. Lifecycle analyses show they have superior performance to most other energy sources.

Most commercial modules have a conversion efficiency — the fraction of solar energy that is converted into usable electricity — of 15-20 percent.

A meta-analysis by the U.S. National Renewable Energy Laboratory estimates that such solar modules have an environmental footprint that is less than half that of nuclear energy, and 28 percent of coal power.

The next generation of solar modules promises higher conversion efficiency, lower cost and will use less raw materials to manufacture. Many of these newer module types contain highly toxic chemicals.

Several kinds of thin-film solar modules are available or under development. Their manufacture uses about one percent of the silicon needed to make a crystalline silicon module, but their conversion efficiency is only in the six percent range.

They are flexible, lightweight and durable, and can be bonded directly onto curved surfaces, including glass, stainless steel or plastic. However, they can degrade at a faster rate than crystalline silicon, reducing the lifespan.

Cadmium-telluride thin-film modules are the second-most common photovoltaic (PV) technology in the world. They currently represent five percent of the world market. They can be manufactured quickly and inexpensively. Lab tests show their conversion efficiency as high as 22.1 percent.

Many concerns exist about the chemistry of these modules since cadmium is a well-known pollutant. It can be toxic to humans and plants and animals.

Organic films begin with a roll of thin plastic. Photovoltaic compounds including nanomaterials like carbon fullerenes, a molecular form of carbon, are then dissolved in ink and printed onto the film.

These films can be applied to building façades and are suitable for encapsulation in glass windows as part of the lamination process. Such films are ultra-light, flexible and can be customized. They are 20 times lighter than a piece of office paper.

One promising future solar application is the development of paints and coatings that generate electricity. Using nanomaterials known as quantum dots, a manufactured crystal that can transport electrons like a semiconductor, these materials may one day be applied to buildings, vehicles and other structures.

The thin nature of the material creates some challenges with respect to durability and evenness of application. Solar paints may approach 10 percent efficiency, which may make this technology viable given the massive amount of surface area in our built environments.

Decades of experience with crystalline silicon solar modules has led to many improvements. Chief among these is the steady decrease in the environmental footprint of these modules.

But many of the next-generation solar technologies rely on nanomaterials and include toxic heavy metals like lead and cadmium. Current regulatory systems for assessing and managing the risks nanomaterials pose to human health and the environment may be inadequate.

Until these issues are addressed, we should feel confident using our current generation of crystalline silicon modules. They represent an excellent compromise between efficiency and toxicity while playing a role in combating human-made climate change.

Solar industry exec has a message for Washington, D.C.: more than 300,000 jobs are not ‘ridiculous’