China has invested US$90 billion in the countries involved in its Belt and Road Initiative (BRI) since 2013. The BRI involves developing infrastructure in 126 partner countries to boost trade within a region stretching from Indonesia to Western Europe via the Middle East and East Africa, inspired by the historical Silk Road.

While this economic development could help raise living standards in participating countries, it could also come with a huge potential increase in greenhouse gas (GHG) emissions. But our research demonstrates the region has huge potential for generating solar power. This could decouple economic growth from increased carbon emissions.

Currently, over 55% of global GHG emissions come from the entire BRI region, and this number is expected to rise to above 65% by 2030 if their growth rates of emissions remain at current levels. Four countries in particular – China, India, Iran and Saudi Arabia – are among the top ten CO₂ emitters in the world and were responsible for 39.4% of the global emissions in 2017. Those emissions are likely to rise unless substantial efforts are made.

Yet the region also has huge potential to reduce emissions and become a major source of solar energy. Little research has been done specifically on the BRI region. So we evaluated the potential for solar electricity across 66 adjoining countries within the main BRI region, considering all the factors that might impact output.

Our study suggests solar generation in the BRI region could provide a total of 448.9 petawatt hours of electricity annually, which is the equivalent of 41.3 times the area’s total 2016 electricity demand. Just 3.7% of this would provide enough annual electricity to power the entire region in 2030 based on projected demand, requiring land equivalent to approximately 0.9% of China’s total area. 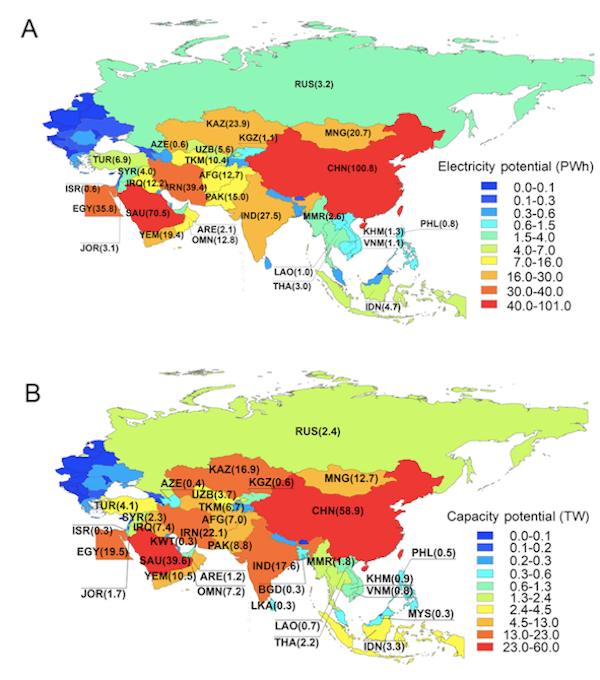 The four top emitters have an estimated solar potential of up to 238.2 petawatt hours, representing 53.1% of the total for the BRI region we studied. If these countries could use solar power to generate just 30% of their electricity demand, it could save approximately 2.4 billion tons of carbon dioxide, equivalent to a reduction in global carbon emissions of 7.2%.

We also found that 63 out of the 66 countries consume a total of just 30.1% of the region’s electricity, but together could produce as much as 70.7% of its solar power. However, this highlights one of the challenges with any plans to make the most of solar power in the BRI region. Countries need to cooperate over technology or even link their electricity grids together in order to share their green power.

Building connections
For many countries in the BRI, energy interconnection can be achieved by upgrading and expanding existing local interconnected grids within each individual country rather than by creating new infrastructure. This may make interconnection easier, cheaper and have less environmental impact. For example, countries such as Kazakhstan could upgrade the Soviet-era Central Asian Unified Power System designed to share hydropower between countries in the region.

Because solar power is intermittent, countries need to build their solar infrastructure to supply electricity created in times and places where the sun shines most, to when and where it is most needed. For example, connecting rural areas to more highly populated urban areas, which could be done across country borders to maximize the outputs. 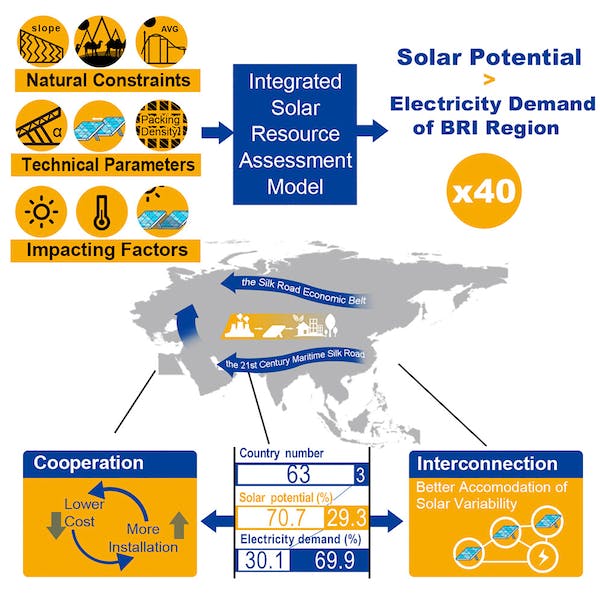 There are also barriers to introducing a massive solar generating program in the first place. Although solar energy has become a lot cheaper in recent years, the cost of building, operating and maintaining large amounts of solar infrastructure could still be prohibitive for many of the lower-income countries in the BRI region, and the industry might need subsidies to make it happen.

The relatively poor condition of the electricity grids in many of these countries will also make it harder to integrate a variable source of energy such as solar power. This is due to the lack of modern technologies within some of these countries, especially in regions with a poor electricity network.

These challenges mean that governments and industry need to work together effectively and cooperate across borders in order to reduce the risks of investing heavily in solar. If they get it right, these countries could jump from their carbon-intensive trajectories to a low-carbon future.

Does solar increase the value of your home at time of sale?

By Brett Porter6 days ago0