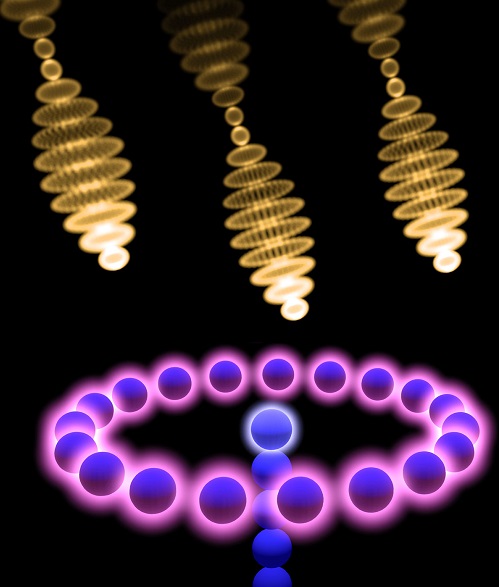 In theory, a superabsorbing ring or system and a Superradiance phenomenon can be combined with recent technology to create a device that draws in light ultra-efficiently. This could be revolutionary for devices ranging from digital cameras to solar cells.

But there’s a problem: the advantage of this quantum effect is strongest when the atoms are already 50% charged – and then the system would rather release its energy back as light than absorb more. Discover how researchers and theorists at Oxford University solve this problem.

In-Depth Story:
A quantum effect in which excited atoms team up to emit an enhanced pulse of light can be turned on its head to create ‘superabsorbing’ systems that could make the ‘ultimate camera pixel’.

‘Superradiance’, a phenomenon where a group of atoms charged up with energy act collectively to release a far more intense pulse of light than they would individually, is well-known to physicists.

In theory the effect can be reversed to create a device that draws in light ultra-efficiently. This could be revolutionary for devices ranging from digital cameras to solar cells. But there’s a problem: the advantage of this quantum effect is strongest when the atoms are already 50% charged – and then the system would rather release its energy back as light than absorb more.

Now a team led by Oxford University theorists believes it has found the solution to this seemingly fundamental problem. Part of the answer came from biology. ‘I was inspired to study ring molecules, because they are what plants use in photosynthesis to extract energy from the Sun,’ said Kieran Higgins of Oxford University’s Department of Materials, who led the work. ‘What we then discovered is that we should be able to go beyond nature’s achievement and create a ‘quantum superabsorber’.’

A report of the research is published in Nature Communications.
At the core of the new design is a molecular ring, which is charged to 50% by a laser pulse in order to reach the ideal superabsorbing state. ‘Now we need to keep it in that condition’ notes Kieran. For this the team propose exploiting a key property of the ring structure: each time it absorbs a photon, it becomes receptive to photons of a slightly higher energy. Charging the device is like climbing a ladder whose rungs are increasingly widely spaced.

‘Let’s say it starts by absorbing red light from the laser,’ said Kieran, ‘once it is charged to 50% it now has an appetite for yellow photons, which are higher energy. And we’d like it to absorb new yellow photons, but NOT to emit the stored red photons.’ This can be achieved by embedding the device into a special crystal that suppresses red light: it makes it harder for the ring to release its existing energy, so trapping it in the 50% charged state.

The final ingredient of the design is a molecular ‘wire’ that draws off the energy of newly absorbed photons. ‘If you built a system with a capacity of 100 energy units the idea would be to ‘half-charge’ it to 50 units, and the wire would then ‘harvest’ every unit over 50,’ said Kieran. ‘It’s like an overflow pipe in plumbing – it is engineered to take the energy level down to 50, but no lower.’ This means that the device can handle the absorption of many photons in quick succession when it is exposed to a bright source, but in the dark it will simply sit in the superabsorbing state and efficiently grab any rare passing photon.

Eventually, harvesting sunlight in a highly-efficient way might one day be possible using superabsorbing systems based on our design, but a more immediate application would be building an extremely sensitive light sensor that could form the basis of new camera technology,’ Professor Simon Benjamin, a co-author of the report, explains. ‘A camera sensor harnessing the power of our superbsorbing rings would have very high time and spatial resolution. And it could pave the way for camera technology that would exceed the human eye’s ability to see clearly both in dark conditions and in bright sunlight.’

The research team included scientists from Oxford University, National University of Singapore, University of St Andrews, and the University of Queensland. The work was supported by the UK’s Engineering and Physical Sciences Research Council (EPSRC).