Based on millions of transaction-level data points generated within the EnergySage Solar Marketplace from July 2017 to June 2018, this report provides a unique look into the economic impact of the Section 201 solar tariffs on residential solar customers. 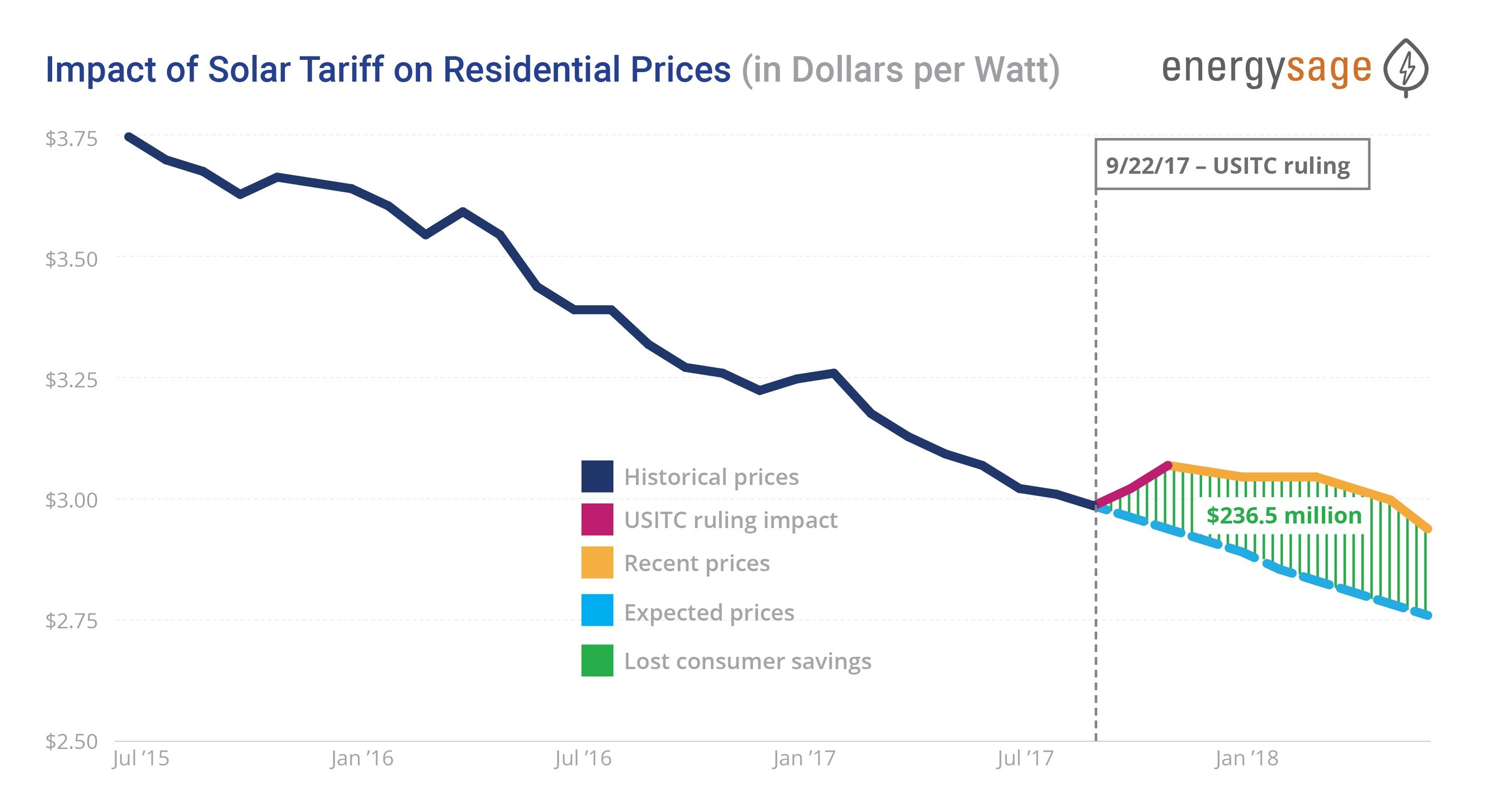 According to the latest EnergySage Solar Marketplace Intel Report™, the cost of a solar installation is now 5.6% higher due to President Trump’s solar tariff than it would have been if costs had been allowed to fall at their preexisting rate of decline. This has created $236.5 million in additional costs for American consumers.

According to the latest EnergySage Solar Marketplace Intel Report™, the cost of a solar installation is now 5.6% higher due to President Trump’s solar tariff than it would have been if costs had been allowed to fall at their preexisting rate of decline.

This has created $236.5 million in additional costs for American consumers.

Though prices have since restarted their decline, they are decreasing at a slower rate than before, as shown in the accompanying graph.

The result is that the cost of a solar installation is now 5.6% higher than it would have been if costs had been allowed to fall at their preexisting rate of decline.

For the average customer, this amounts to paying an additional $0.16 cents per watt more than they should have, or $960 for a standard 6-kilowatt solar panel system.

When this price increase is applied across all residential solar purchases made nationwide after September 2017, the tariff effectively created a $236.5 million tax imposed on American consumers.

“These tariffs are yet another burden imposed on an industry that has long struggled with costs,” said Hugh Bromley, an analyst at Bloomberg NEF, an industry research firm leveraging EnergySage Marketplace data. “The residential solar industry is fragmenting. EnergySage data allows us to monitor competition among the so-called ‘long tail’ of local and regional players who don’t publicly release their earnings in quarterly reports.”

Other key insights from the latest Solar Marketplace Intel Report include:

However, cost increases only occurred in states where the cost of solar was already below the national average.

Panasonic and LG are now the two most popular solar panels
The two well-known consumer electronics brands made up 46% of all quotes submitted to shoppers on EnergySage in H1 2018.

The Japanese and South Korean manufacturers overcame obstacles created by the solar tariff, and secured greater market share due to their high-quality equipment ratings and recognizable brand names.

“Any trade restrictions imposed on the solar industry hurts American consumers and American workers,” said EnergySage CEO and founder Vikram Aggarwal. “Yet despite these recent hurdles, the residential solar industry remains poised for tremendous growth over the next few years. All-time highs in consumer interest for solar-plus-storage, combined with falling prices and greater transparency, have mitigated the impact of these tariffs. As we show in this report, we have seen consistent increases in solar shopping levels on our Marketplace across the country.”

EnergySage is the most visited website in the U.S. solar industry and runs the country’s leading comparison-shopping marketplace for rooftop solar, community solar, and solar financing.

This latest report furthers the company’s mission to make solar more accessible and affordable for Americans through simplicity, transparency, and choice.

This report can be downloaded for free at: www.energysage.com/data.

ABOUT ENERGYSAGE, INC.
EnergySage is the leading online comparison-shopping marketplace for rooftop solar, community solar, and financing. Supported by the U.S. Department of Energy, EnergySage is the trusted source of information for over 6 million consumers across 35+ states.

As of early 2018, the company has sent over $3 billion in solar installation requests to its network of more than 500 pre-screened solar installation companies, and serves as a high-quality lead source for solar financing companies and powerful distribution channel for solar equipment manufacturers. EnergySage is unique in that it allows consumers to request and compare competing quotes online, unlike traditional lead-generation websites.

For this reason, leading organizations like Environment America, Connecticut Green Bank, Duke University, National Grid, and Staples refer their audiences to EnergySage to empower them as they consider solar. The EnergySage formula of unbiased information, transparency and choice helps consumers go solar with confidence – at a higher rate of adoption, and lower cost.