SolarSoundSystem’s Paris party gets going with the DJ’s renewable-powered turntables and speakers. They are making off-grid parties a renewable reality around the world with its mobile sound systems which use the sun and human muscle power to power their partays. /Magali Delporte

Art is at its most powerful when it inspires its viewers into action—and when the artist’s message revolves around alternative energy, those pieces have the power to shape how we view and generate electricity. It’s that notion which has been motivating many visual and musical artists to promote renewable energy through their exhibits and performances.

Instead of some inaccessible fringe technology, the exclusive domain of hippies and doomsday preppers, these artists’ endorsements have helped rebrand solar as a hip new technology—something that can inspire awe and even, dare we say it, be fun.

Pioneering Eco-Friendly Concerts with Solar-Powered Energy
Music venues consume enormous amounts of energy, all-in-all. According to the European Commission, venues can use anywhere from 76,000 to 5,806,000 kilowatt hours of energy a year. That amounts to over 16,000 tons of CO2 emissions per year.

Those figures are all too real to Cédric Carles, founder of Solar Sound System, an organization whose mission is to bring 100% renewable-powered shows to an eager public. Using turntables and speaker systems powered by solar panels—and bike generators pedaled by attendees—Carles’s systems provide the music for large public parties in Lausanne, Paris, Berlin, Marseille, the Basque country, and Tel Aviv.

These self-powered systems allow his parties to run well past nightfall and make them much more eco-friendly and self-sustainable to boot.

Carles has loftier goals, however. The SolarSoundSystem now has six permanent locations, with plans to expand into London and Hong Kong as well.

Each branch is franchised, with 20% of the profits returned back to SolarSoundSystem. Carles’s aim is to eventually fashion a viable business model for eco-friendly music venues.

Profits from concerts could then be used to fund research and kickstart alternative energy technologies, creating a sort of cyclical ecosystem for renewable music.

Visual Artists Also Featuring Solar Power in New Exhibits
Not to be left behind, though, many visual artists have rushed to create and display their own solar-powered exhibits. As solar panels have become cheaper and easier to come by, sculptors and conceptual artists have been taking full advantage of a brand new medium: solar-powered lights.

Loop.ph bills itself as a “spatial laboratory”—a collaboration between artists Mathias Gmachl and Rachel Wingfield, combining art, architecture, and design for a visual spectacle that examines the boundaries of space and technology. Their outdoor display Sonumbra in Mowbray Park, Sunderland, featured thin solar-powered light strands woven into large luminescent parasols.

The idea was to offer park goers shade in the day and lighting at night—while designing a fascinating real-life spirograph of light. The piece was powered with flexible printed, organic solar cells that could be woven directly into the textile—an example of how an emerging PV technology could be used to change the landscape of public spaces into something unique and visually pleasing.

There’s an opportunity here for solar to be so much more than a mere industrial fixture. Printable solar and flexible organic cells offer the opportunity to disrupt multiple industries and allow for a number of new inventions—or even change the look and feel of the very buildings we live and work in.

We’ll have to wait and see where the technology eventually goes, but with artists and entrepreneurs like these pushing the envelope, a solar-powered future is looking better all the time. 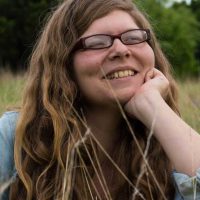